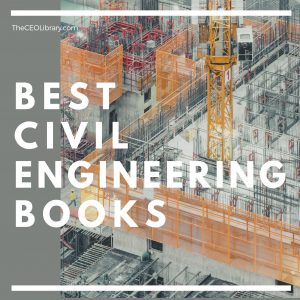 When I sit down for a read, the last thing I think of is grabbing a civil engineering book even though that’s my full-time job. At first, I was very skeptical of what the contents of these books were, but I soon found out that they could expand my thinking and open my viewpoint to new ways of building.

Engineering is complicated, so sitting down with a good book can help me focus and learn new techniques. Some helped me brush up on structures, while others can help you remember the previous information you read for some exam. Either way, they help you keep your foundations and become stronger in your field.

That said, it can be a bit confusing on where to start. The best books I’ve picked up are ones that don’t usually reference primary material or exam material.

Focusing on foundation, structures, and even advanced techniques like chemical or geotechnical engineering help to open up new career opportunities. Some of the best books are the ones written by professionals in the field.

So, if you’re a bit lost on where to start:

That said, here’s a list of books you should consider reading:

This book has it all when it comes to modern era wood framing and is a fantastic guide for anyone who wants to get into construction or engineering.
alan pierce
CEO/Ansuz Balder Magni Investments

This book is fantastic for teaching the old world and increasingly rare joinery techniques for framing. These techniques were used for houses that lasted for hundreds of years, far longer than many of the modern western homes of today.
alan pierce
CEO/Ansuz Balder Magni Investments

The Great Bridge: The Epic Story of the Building of the Brooklyn Bridge

A fascinating read about when bridges were still in beta.

Work the System: The Simple Mechanics of Making More and Working Less

Work the System (Carpenter), which is one of the best books you can get on scaling yourself & your business. It’s excellent & wish I had read it earlier in my career.
Marvin Liao
Socio/500 Startups

Historian David McCullough wrote one of the most factually accurate and detailed books about the construction of the Panama Canal. Why would such a book interest a leader? Because it shows how a great thing was achieved, and what it took to take the project from the paper and make it a reality.

Great things are never simple and easy to achieve. It takes creativity. Mistakes happen and losses are sustained. You have to rethink your strategy. You need a B, C or even a D plan. You do whatever it takes to make it happen. This is a valuable lesson for any leader and entrepreneur.

Story: Style, Structure, Substance, and the Principles of Screenwriting

It's a heart-wrenching but eye-opening look at the safe ways America looks back at slavery and its impact on modern capitalism. During an election cycle focused on populism and anger, this is a book every American should read.

I will pick Jules Verne’s Mysterious Island for a non-business favorite. I don’t claim this is the best book out there. Not even in its category (whatever that is). But I adored this book as a young boy. I remember that the night when I was approaching the end of the book a power outage happened, and I finished it reading it with the help of candle light. I love this book that much. Jules Verne introduces a world full of mysteries, with challenges that seem insurmountable but with heroes that always find ingenious ways to overcome them using science and strength of character. It is also part of a Universe (like the Marvel one), building on some of the reveals from “Twenty Thousand Leagues Under the Sea” or “In Search of the Castaways”. Maybe your readers shouldn’t rush and grab this one unless they are 14 yrs old or deeply into steampunk adventure stories. But it meant a lot to me at the time. Maybe it sparked my interest in sciences or cultivated my sense of adventure.
vladimir oane
Fundador/UberVU

Sometimes the only way to get the full story is to put yourself into it as an ‘immersion journalist.’ Shane Bauer wanted to know more about for-profit prisons so he got a job in one as a correction officer, or guard, and reports his experiences grippingly while weaving in the social and economic factors that give rise to these horrors. His book reveals much that that we didn’t want to know about but, having learned about, can never forget.
Barbara Ehrenreich
Autor

For Whom the Bell Tolls

The Memoirs of W.T. Sherman